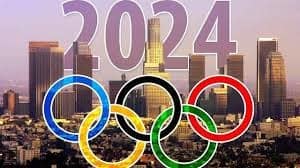 Yesterday, LA 2024, the organization spearheading Los Angeles’s push for the 2024 Olympic games, revealed impressive renderings of the LA Memorial Coliseum and USC’s Dedeaux Field as they would appear if the city wins its bid for the games.

LA faces tough competition for hosting responsibilities—the city is up against Paris, Rome, and Budapest. In June, leaders of the Paris bid unexpectedly arrived in LA and began scoping out the competition. The French capital hasn’t hosted a summer games since 1924; LA has hosted the games twice since then.

Still, LA 2024 has presented a compelling plan for the games that shows how uniquely equipped the city is for hosting such a complex, international event. All of the venues that LA 2024 has proposed for use in the games exist already or will be complete long before 2024. The map below details most of the key sites of LA’s bid.
1 Los Angeles Memorial Coliseum
The venerable Coliseum has already hosted Olympic events twice—in 1932 and 1984. If LA should win its bid for the 2024 games, the Olympic cauldron built for the ’32 games will burn once more. The stadium, which will celebrate its hundredth birthday in 2023, is set to host track and field events, along with the opening and closing ceremonies.

LA 2024 has an ambitious plan to turn USC’s baseball stadium into a temporary swimming facility. Meanwhile, the nearby Uytengsu Aquatics Center, which hosted swimming events during the ’84 games, will be used as a training facility.
3 Galen Center (GEC)
The arena that houses USC’s basketball and volleyball teams will be used for two highly underrated Olympic sports: badminton and taekwondo.
4 Los Angeles Convention Center
LA 2024 has big plans for the convention center, selecting it to host competition in boxing, wrestling, table tennis, judo, fencing, and handball.
5 Staples Center
Should any Lakers or Clippers make the USA basketball team in 2024 (Brandon Ingram?), they’ll feel right at home competing at the Staples Center, where men’s and women’s basketball games will be held.
6 Los Angeles City Hall
Earlier this year, LA hosted Olympic trials for runners hoping to compete in the marathon in Rio de Janiero. If the city is awarded the 2024 games, City hall will provide a dramatic backdrop for the marathon and cycling events as the course winds its way through Downtown LA.
7 The Forum
Back in business and newly repainted, the Forum—which hosted basketball games during the 1984 games—will be the place to go for gymnastics if LA succeeds in its bid.
8 Rose Bowl
Along with the Coliseum, the Rose Bowl also hosted events during the 1932 and 1984 Olympic games. As in ’84, the stadium will host soccer matches.
9 LA Football Club Stadium
Once slated for swimming, LA 2024 has decided the future home of the Los Angeles Football Club will instead join the Rose Bowl in hosting soccer matches if the city gets the games.
10 Griffith Park
Beyond serving as the backdrop for an endless series of blimp shots of the Griffith Observatory, the beloved park would also host golfing competition if the city is awarded the games.
11 Microsoft Theatre
The 7,000-seat theatre formerly known as Nokia will provide a comfortable, climate-controlled setting for spectators to take in some good old fashioned weightlifting.
12 Santa Monica Beach
Arguably LA County’s most internationally recognized beach, Santa Monica is set to host beach volleyball, open water swimming, and the aquatic portion of the triathalon.
13 Pauley Pavilion
The Pauley Pavillion, where UCLA plays its home basketball and volleyball games, will host volleyball in its less scantily-clad indoor form. Meanwhile, field hockey competition will be held at the nearby North Athletic Field.
14 Los Angeles Tennis Center
LA 2024 has chosen UCLA’s world class tennis center as an ideal spot for rugby competition. Just kidding. It’ll host tennis matches, obviously.
15 UCLA Student Housing
It’ll be dorm living for the athletes competing in 2024 if LA wins its bid. UCLA’s student housing facilities have been selected for the always-collegiate Olympic Village. Meanwhile, USC’s campus across town will serve as the media village.
16 StubHub Center
Carson’s Stubhub Stadium will host rugby, while tennis, track cycling, and BMX events will be held at adjacent facilities in the sprawling athletic complex.
17 Sepulveda Basin Sports Complex
Equestrians, marksmen (and markswomen), and canoers will all head to this LA River-adjacent sports complex in Encino for their respective events.
18 LA Waterfront
The nation’s busiest port will provide a dramatic backdrop for competition in sailing.
19 Lake Casitas
You’ll have to head pretty far outside the city to see rowing and canoe sprints. LA 2024 proposes holding those events at Lake Casitas in Ventura County.
20 Santa Monica Mountains
What better place to hold mountain biking events than the scenic Santa Monica range overlooking the vast expanse of city below?
21 Universal Studios Hollywood
Universal Studios will serve as the International Broadcast Center for TV crews broadcasting the games around the world.